Welcome to a crazy world of independent rock! It is the world of the American band Modest Mouse. The first time I heard a song of this amazing band was in an episode of the popular teenage drama The OC California. As you probably already know from a previous post, one could say that I am kind of hardcore OC California fan. 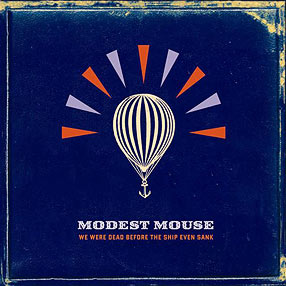 Now back to the review of their fifth studio album: The first song I would like to elaborate on, is the second track and at the same time my absolute favourite one.
Dashboard has a happy and pumping beat, which lends the song a very uplifting mood. Listening to it makes you want to sing along and I often do so, though I definitely should not as I am horrible in following a melody. Although you get the notion that it is a happy-go-lucky song, the lyrics have a slightly tragic touch, but the “whatever-happens-we-don’t-care” attitude makes it cheerful again. The fast beat enhances this jolly mood and it lends even a touch of Ska genre to the song. Moreover, the lyrics imply a view of making the best out of every situation and never looking back which enhances the motivational yet at the same moment strange song.

Well, it would’ve been
Could’ve been worse than you would ever know
Oh, the dashboard melted
But we still have the radio

Parting Of The Sensory represents the opposite of Dashboard as it a very slow song for this band. The sagging vocals create a dragging atmosphere – perfect for a calm day.
Listening to the lyrics one can easily realise that the themes of ship, open sea and sailor are being kept but compared to Dashboard it takes a completely different turn:

Who the hell made you the boss?
We placed our chips in all the right spots
But still lost
Any shithead who had ever walked
Could take the ship and do a much finer job
This fit like clothes made out of wasps
Aw, fuck it I guess I lost

The song is about being defeated and giving up. Nevertheless, when you know this band, you will find this quitting attitude really unusual and while listening more into the song it makes an abrupt change. All of a sudden (around 3:40 minutes) it gets aggressive, fast and energetic. In addition, not only the sound changes drastically but also the lyrics undergo a transformation. They start getting more rebellious and mutinous.

The end of Parting Of The Sensory fits then again to the style of Modest Mouse.

We’ve Got Everything is like Dashboard a very catchy song, but there is like a breakdown in the middle of the track, which makes it very special by interrupting the upbeat melody with ambient keyboard tunes and when you listen very carefully (and with a lot of imagination) you are able to hear waves crashing the shore.

Fly Trapped In A Jar is what I call a typical Modest Mouse song – weird sound, strange beat and the most important part of their style really disturbing lyrics. I can try as hard as possible, but I am not able to figure out the meaning of this song at all. If you have any clue please feel free to leave a comment, would be happy to hear your opinions. Another speciality about this track is that after estimated two minutes it changes completely as it would be a different song.

Little Motel is not a song for you when you weep easily because it will definitely get you. It is a wonderful soft song and this ballad has even reasonable and logic lyrics that everyone is able to understand. This touching love song, along with the emotional vocals, builds very carefully its intensity up and ends with only a few instruments and the very soft voice of the singer.

Overall, it is a great album, which will transfer your mind on to a high seas adventure where Murphy’s Law is well applicable: Anything that can go wrong will go wrong. Nonetheless, there will be a silver lining on the horizon, which will keep the listener motivated and entertained through the whole album.