In the German language, we have the term “Verpackungsopfer”. If one translated this term word for word into English, it would be something like “packing victim”. This means that if you are a so-called packing victim, you will buy stuff only based on the nice and appealing wrapping. And unfortunately, I am one… I saw this album in our schools media library and was immediately attracted by the album cover. A monochrome photograph of three “bad boys” in leather jackets – this just screamed for independent rock, punk, grunge and alternative rock. But little did I know, when I borrowed this CD, that this band will become one of my absolute favourite ones. 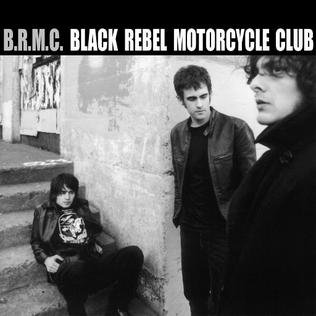 This American rock band from the sunny San Francisco, Black Rebel Motorcycle Club (often abbreviated as BRMC) are known for dark, raw and a little bit grungy music. The three men on the cover of B.R.M.C. were the original formation of the band. When former drummer Nick Jago left, Leah Shapiro took over his position and completed the band of Peter Hayes and Robert Levon Been. I think the fact, that they have a female drummer, is really awesome because not many rock bands feature a woman. However, for their debut album, which I would like to review, the band included the three original members.

This album starts with the song Love Burns, which has a somewhat strange intro, lasting about half a minute until the song really begins. It is a very guitar and drum dominant tune along with a catchy beat. Yet, it gets soon monotonous as the rhythm stays the same and but at the end it gets faster.

The extraordinary deep voice of the singer shows very well to advantage in the second song Red Eyes And Tears, probably my favourite song on this album. This track has a little touch of the grunge genre, although it stays steady and has not much variation, the voice makes this song very unique.  Something all their songs have in common is that the singing does not vary much with different tone pitches. It remains most of the time same which I really enjoy.

The next title I would like to elaborate on shows clearly why this band belongs to the rock genre. Whatever Happens To My Rock’n Roll will definitely wake you up and differs a lot to the previous songs. It has a very uplifting, catchy tune and reminds a bit of the classic Rock’n Roll music but only with a more garage atmosphere. And to this track I like to sing along, but, believe me, you definitely do not want to hear me singing 😉

As Sure As The Sun is what I call a dull, low song. The bass at the beginning  has a slow rhythm. This track shows clearly that this band is not exactly the life and soul of the party at a live concert.  When they are one stage, they are there because they want to play their music to an audience and their aim is not in the first line to entertain their listeners with fireworks or grandiose special effects. They keep their shows simple and therefore, BRMC is a great concert for having a quite beer and just chilling and enjoying the music without being afraid that the crowd starts to mosh or pogo dance. So definitely a band you do not want to miss a live show when they are in town!

All in all, I really enjoy this album, but one can hear that the band was at the beginning of their career and experimented a little bit with different styles. This resulted in a bit inconsistent album. And as a fan, I obviously have all their CDs, and I know that their future albums are  even much better.

Which song do you enjoy the most? Let me know in the comment? And what is your absolute favourite band? 🙂

P.S. My blog is now on Bloglovin too 😉

3 thoughts on “Black Rebel Motorcycle Club– B.R.M.C. ~ Me Myself And My Music”